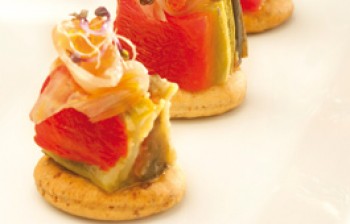 For the vegetable tart

Place the peppers on a baking tray, add a spoonful of oil and rock salt, and roast in the oven for 40 minutes at 150 º C.

Remove from the oven, cover with cling film while they cool, then peel and set aside.

Slice the marrow and the aubergine lengthwise in 1 centimetre strips.

Place on a baking tray with some oil, salt, pepper and oregano, and roast in the oven for 5 minutes at 180º C.

Peel, deseed and cut up the tomato, place it on a baking tray with the rest of the oil, salt, pepper, oregano and a little sugar.

Place the pepper, aubergine, tomato and marrow in a mould.

Cover with cling film and put in the fridge for 24 hours.

When the tart is cold, cut in to 16 equal pieces and set aside.

Assembly of the tapa

Place the pieces of tart on the wholemeal Quely Tapas, followed by a slice of smoked dolphin fish, the trout roe and the red cabbage sprouts.

Products Quely used in this recipe:

For the vegetable tart

For the other ingredients