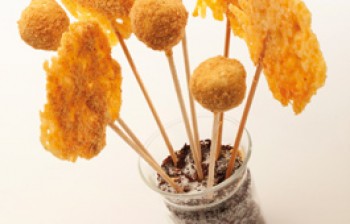 Place the lollipop sticks on a baking tray and on the end of each one, place some of the cheese.

Put in the oven for 5 minutes at 175 º C, then remove, coat them in the biscuit crumbs, and set aside.

Cut the duck liver pâté into cubes and place on the end of the lollipop sticks in the same way as lollies and chill them.

Divide the goat's cheese into 8 equal parts, mould it by hand so that it covers the pâté on each lolly and chill them again.

Bring the water to boil with the sugar in a saucepan, then remove it and leave it to cool.

Dip the lollies in the syrup and then in the Quely María biscuit crumbs and set aside.

Assembly of the tapa

Products Quely used in this recipe: